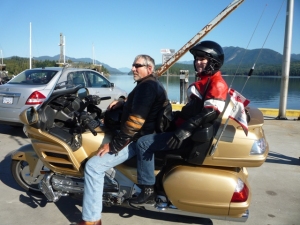 She lives in the country surrounded by wildlife, rides a Honda Gold Wing 1800 motorcycle, and has been an active member of the Gold Wing Road Riders Association, B.C. D Chapter, for three years. Not the typical profile you would expect for an antiques appraiser. Yet Gale Pirie, an accredited and independent personal property appraiser (i.e., not affiliated with any auction house or store), is highly respected in her field and considered to be one of the best in British Columbia. She has also appeared as an appraiser on the Canadian Antiques Roadshow.

Although she is known for her expertise in porcelain and pottery, she is a generalist – “appraising everything (except real estate), from human skeletons to railway tracks and dinosaur teeth.” For Gale it is not just about determining an item’s value, it is also about creating and understanding the connections to our past.

Gale grew up in an affluent neighbourhood in Vancouver called Shaughnessy, but wasn’t surrounded by antiques in her home. For her, the connection came from a few special items that her grandmother had brought over on a ship from Europe in the late 1920s. Although a privileged Catholic family in Poland, they were forced to leave the country with very little. Her grandparents managed to bring their young family and a few possessions that included a sewing machine and some feather quilts. Gale’s mother took great care of the quilts over the years and as Gale and her twin sister got older, their mother had the quilts redone for their respective hope chests. This is a piece of Gale’s family history that she treasures and that helped her to see early on the importance of preserving and appreciating where we come from.

Gale went on to become an educator in both the public school system and in colleges. She eventually became the Director at a public college, from which she has since retired. Throughout her career she has always maintained a passion for literature, history and antiques. She has been especially fascinated by our local history, whether from our aboriginal ancestors or from those who came later to settle the land. She believes that all of these stories and artifacts make up our country, and it is important to maintain these connections.

While still working she fueled her passion for history and antiques through ongoing research and study, eventually becoming an accredited appraiser in 2000. She began doing appraisals part-time, initially working with lawyers and insurance companies appraising items for legal purposes. Most of her work came from word of mouth referrals, but in 2007, just around the time she retired, she received a call from the producers at CBC to appear as an appraiser on the Canadian Antiques Roadshow. This led to increased exposure for Gale’s appraisal work, and today she has a busy practice offering direct appraisals for individuals one-on-one or at appraisal clinics, as part of fundraising events, evaluating in-kind donations, offering her services for pre and post loss insurance, and for legal purposes.

Her work is quite diverse as are her clients, some of which are scattered all over the world. As much as she can offer appraisals over the Internet, she prefers to do them in person as she can create a better context for the item and its historical relevance. This then allows her to develop a deeper connection to the story behind the item and this may have an impact on the value.

Some of Gale’s favourite moments are when she can help kids get excited about the past and connect with their own family’s history. While offering an appraisal clinic at the Kerrisdale Antiques Fair in Vancouver, Gale was asked to appraise some items for a father and his three young sons. They had brought in three albums of postcards and the boys were not all that interested initially. Through a series of questions, and with a purpose in mind, Gale was able to engage them. The albums contained 1000s of postcards and letters written back and forth between their great grandparents while the great grandfather was working overseas. She explained to the boys that they were all written in pencil as they didn’t have ballpoint pens then and that for the time, these postcards would have been considered quite “steamy”. The albums offered an amazing overview of what was going on during that era but also a detailed account of their great grandparent’s courtship.

Although British Columbia is still considered quite young by historical standards, Gale believes that the “wild west” is quite rich with history. She loves the notion that “many people who came out here were either looking for something or running away from something.” As a result, she is fascinated by the “characters who built our province”. From the missionaries to the prospectors looking to make it rich during the gold rush to the Japanese Internment camps…they have all collectively added to our province’s diverse history.

In Coquitlam, B.C. Gale was asked to appraise items from a gold rush hotel in Rossland B.C., the Hotel Allan. The hotel was designated a heritage hotel as a result of the work of Bill Barlee, a former B.C. politician raised in Rossland, who is also well know for his impressive collection of “old west artifacts” and a popular T.V. series called Gold Trails and Ghost Towns. He also wrote a book called Gold Creeks and Ghost Towns and much of his collection can now be found in the Canadian Museum of Civilization in Ottawa. Unfortunately after the hotel was officially designated, it burned down. However, many of the historical items had luckily been removed when it was sold. Turns out the family that hired Gale had at one time owned the Hotel Allan.

Gale was also recently flown into the Crescent Valley to appraise some items in a heritage building that she discovered was once the Crescent Valley Jail. While there she was quite intrigued by the room where she was doing the appraisals and by asking questions and doing a bit more research, she realized that the room was once the cell where the Sons of Freedom (Doukhobor Extremists Group) were incarcerated.

Gale continues to research our history through these many connections and passionately shares these stories with her clients. Even though Gale lives in B.C., she travels extensively and offers personal property appraisals across Canada and Internationally. Gale has a Web site where she can be contacted and she also regularly appraises at local flea markets and antiques at the Croatian Cultural Centre and at the Kerrisdale Antiques Fair.

I want to share with you all things that support this wonderful lifestyle that I call our “secondhand culture.”